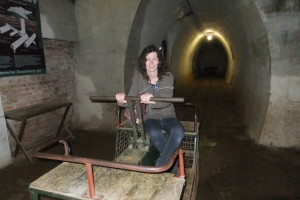 Our Underground Tour is located in the Miedzyrzecz Fortification Region of Poland, situated about 62 miles (100 km) from the German border, between the Oder and Warta Rivers. We’ll visit an amazing fortification system built by  Germans as a military defense line. In all over 100 reinforced concrete bunkers were constructed; 21 of them are interconnected to create a network of underground tunnels 20 miles (32 km) long, and as much as 131 feet (40 meters) deep.

Besides being stockpiled with military weapons, the underground system was fitted with lighting, ventilation, water, sewage, and communication systems. It also contained barracks, ambulances, and even a narrow-gauge train, capable of traveling through the tunnels carrying personnel and munitions from one station to another. Today, the only signs of life are in winter, when the tunnels are home to as many as 35,000 bats, of 12 different species. It is the largest underground bat refuge in Europe.

Above ground you can still see the steel domes of several of the bunkers, a Russian tank, and miles of concrete antitank barriers called “dragon teeth.” If you are interested in World War II history, this tour may become a highlight of your visit to Poland.